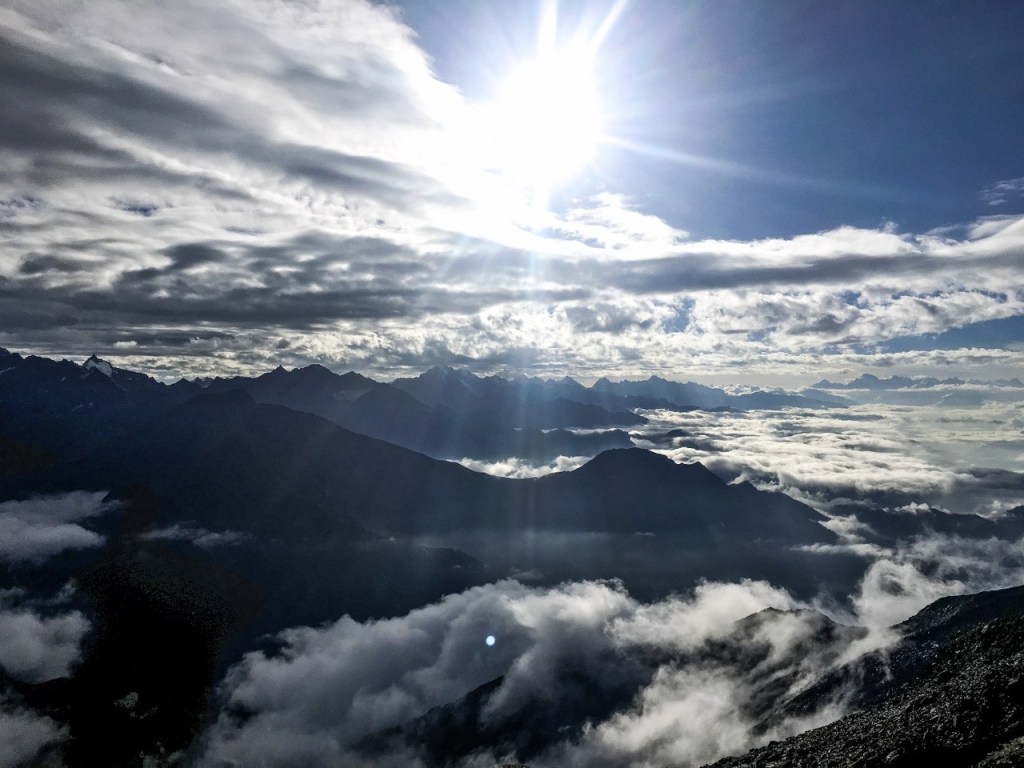 Shrikhand Mahadev trek is the saga of speaking stones, boulders called as stairs, flamboyant waterfalls, canals cutting through the ways, muddy ways beyond clouds, scenic snow clad mountains and all that which is a part of mother nature. The trek is famous as a pilgrimage to the peak of Shrikhand Mahadev where a rock-made Shivling of around 75 feet in height and 46 feet in thickness is situated at a height of 18570 ft in the Indian Himalayas. The Shivling appears to be God Shiva’s face with matted hair, eyes, and nose when looked from the front and is fissured (khandit in Hindi), has cracks in it, hence named SHRI ‘KHAND’ MAHADEV.

Usually, ShriKhand Mahadev pilgrimage tour is organized from full moon day in July to full moon day in August (Ashada Poornima to Shravana Poornima as per the Hindu Vikram calendar) by Himachal Pradesh state government. The schedule varies every year as per the weather forecasts. However, the official dates remain (1st to 15th of July) in case there is no weather calamity.
Thousands of pilgrims and Shiva devotees try their hands to trek Shrikhand every year. Other then devotees there are trekkers, adventurers, climbers who do not miss their chance to witness and experience the surreal beauty of this untouched and uncivilized region.

Suggested Read: Tips for Responsible Trekking: How Many Do You Follow?

The trek is of around 32 kilometers on one side. The route is marked with signs throughout the valley till ShriKhand peak. You see signs of Yellow and Red paint on boulders as the guidelines for the summit. The trek goes like:

Shrikhand Mahadev trek starts from Jaon – a small village in Nirmand taluka of Kullu District of Himachal Pradesh. It is located on one side of Kurpan Gad streamlet which later merges in Sutlej river. The village is 23 kilometers from Nirmand Bus Stop and 40 km from Rampur Bushahr and is well connected by road. It remains open throughout the year and serves as the first base-camp for Shrikhand Trek.
The road ends at this village and from now you start walking to reach the next village: Singhgad Village which is just 3 Km from away here. The trek is easy in the starting and you walk straight alongside Kurpan Gad, crossing crop-fields and old houses at times. The village is situated at a very beautiful location amidst dense green forest and is enclosed by green crop-fields. It is the last village on this trek but not the least in the scenic beauty it owns.
Stay Availability: Homestays and Hotels available.
Food & Connectivity: Food is good. Mobile Network is available. Bus(Fix Timings) and taxis are available from Jaon.

From Jaon you start walking towards Barhati Nala besides Kurpan Khad. You cut through the forest for around 7 kilometers and reach this single settlement on edge of the same stream of the river. The place is owned by a hermit named Giri. He lives there alone for most of the year at times visited by these followers and other sadhus. The place is open for all who are on there to Shrikhand Mahadev trek. During the official 15 days(1 to 15th July) of the official Shrikhand Yatra, the hermit with the help of his followers and local provide free food and stay to the pilgrims and trekkers hence called as ‘Langar Sthal’. This is the last point where light is available. After this point, there is no fixed electricity and structured stay.
For it is the last permanent settlement on the way to Shrikhand Mahadev peak it can be considered as an official start point. The serious trekking starts from here only.
Stay Availability: Stay available but in a shared tent.
Food & Connectivity: Self-cooked Rice-Daal-Roti at lunch and dinner. Chai-Paratha in breakfast. Mobile Network is available but the signal strength depends on weather conditions. No transport available can be reached by walking.

From Barhati Nala you cross Kurpan Khad and enters the more dense jungle. You climb for around 5 kilometers in the jungle and reach a small open space in the middle of the jungle with a temple around. It is a lively place during the yatra only as many local tour operators settle their big tents all around the space. They provide food and stay options at very reasonable prices during the yatra time. They operate during the official yatra time of Shrikhand Mahadev trek and then leave to come back next year. It is the first point from where you can have the first glimpse of Shrikhand Mahadev peak. If coming from Jaon you can reach here easily if you do not want to stay at Barhati Nala. Thachru is the second major point to stop after Jaon village.
Stay Availability: Single/Shared tents available during the official yatra time.
Food & Connectivity: Network is rarely available. Food is available at an affordable price.

After Thachru you walk for another kilometer or two to reach Danda Dhar starting point. At this particular point the jungle ends and now you find only shrubs, bushes, small peaks and big boulders scattered all around you while you walk. The last stretch from here to reach the Kali Ghati top is known as the Danda Dhar, in Hindi which literally means, the sharpness of a long stick. This stretch is of around 2 kilometers but highly risky and difficult. The path is narrow and the soil is not solid. You climb at an elevation of more than 60 degrees.
After completing this part of the trek you reach the Kali Ghati top which offers as another base camp on Shrikhand Mahadev trek. For the first time, you get a 360 degree view and can see the path for the next day trekking.

As the name says in Hindi ‘Bheem ka dwaar’ or ‘the gates of Bheem’ in English, this place is the entry point for Parvati Bagicha – your next base camp. It is 8 kilometers from Kali Ghati top. From Kali Ghati the trek goes downwards for the first 2 kilometers till Bheem Talai – another halting point on the trek and after that, it goes gradually up and down. Trekking becomes fun as you cross several small hills and waterfalls till the time you reach Bheem Dwari. This place is live and is a major halting point during the yatra time. You can find multiple tents to stay and ample food. To reach the Parvati Bagicha, you go past this settlement and need to cross the main water stream coming from the top of the nearby hills known as ‘Parvati Nala.’ After crossing the ‘Nala’ there is a steep hike of around kilometer and a half to reach Parvati Bagicha.

Parvati Bagicha is a small open meadow area which seems to be the perfect place for settlement. There are many small and big water streams nearby the tent area, however, these remain alive during monsoon/yatra season only. From here you get a clear view of the valley and can see the villages down.
Parvati Bagicha remains the last halting point on the trek. Beyond this point, you need to reach the summit and return back the same day as after this point there is no availability of stay, food, and water. This is the last camping spot during the yatra as well.

Must Read: THE MUSEUM HOME – A HIDDEN WONDERLAND IN SAINJ VALLEY

From Parvati Bagicha you go for a slanting climb towards Nayan Sarovar which is an alpine lake made from the melting of glaciers around. The lake is worshipped by the local folks and also by the pilgrims. It is a custom for the locals to pay homage here first before reaching for the Shrikhand Mahadev peak. It is believed that if you do not show gratitude towards the ‘Devi’/ Goddess living here on the lake, your journey to Shrikhand remains incomplete.
The lake is a pristine one, surrounded by boulders and wildflowers. And as seen from above the lake is no less than a mesmerizing beauty with powers to enchant anybody passing from here. If the weather is clear then you can see the Shrikhand Peak clearly from here.

Once you reach Nayan Sarovar Lake, the trek takes a left turn. when you see to your left, you find a massive mountain ogling at you. The first thought comes to your mind is that this must be the peak where you trek must end and you will witness the mighty Shrikhand Mahadev. However, this remains just a thought.

You reach this mountain top and from here you can see the belittled Nayan Sarovar and Parvati Bagicha down there. With the increase in height and scarcity of oxygen in the air, trekking becomes more challenging. The trail becomes more dangerous however now you see beautiful vast valleys on both sides as you walk on the cliff of the mountain.

The next part of this stretch is famously known as ‘Bheem ki Sidihiyan’ or ‘Bheem’s Stairs’. Now the proper trail ends and you need to climb and cross very big boulders lied scattered on one another. It is believed that these boulders were thrown on the way by Bheem so that ‘Darshan’ of Shrikhand Mahadev remains a challenging and worthy task. Ather crossing this stretch of the scattered boulders lying on the top of a range of small seven hills you finally reach the glacier from where you will have a face-to-face view of the Shrikhand Mahadev. Once you witness this scene only then you come to believe that the trek has truly ended and from here stars a new journey of coming back to the point where it all started.

What to carry for Shrikhand Mahadev Trek
As the trek is one of the challenging treks of Himalayas, the conditions are quite harsh up there. And if the weather takes a turn it can turn hostile and there is no way to survive. Every year on an average 3 people stuck or die while doing this trek. It is important to important to understand the risk and also to respect the natural conditions to be able to enjoy the trek responsibly.
Few Important items which are must on this trek are Raincoat/ Windcheater/Panzo, Torch, Regular Medicines, Gloves, Shoes for snow, Woolen clothes, Dry fruits, Glucose, Water Bottle, sunglasses and other basic items of trekking. It is advisable to carry medicines if you have breathing problems or face altitude sickness at high altitude and lemons to smell to get over the inhaled wildflowers fumes.
Worth Noticing:
Requesting all the tourists, travelers, backpackers, pilgrims to affirm the effects of rising in global temperature. Earlier, a few years back, one could find patches of snow and glaciers on their way to Shrikhand Peak but now there is just one glacier left that too around the Shrikhand peak only. The impact of global warming and pollution has a large impact on nature.
We believe in Reduce, Reuse, Recycle. We think until and unless we do not try to adapt and implement these there is no way out. Travel more but be responsible for nature to keep it clean and unharmed. 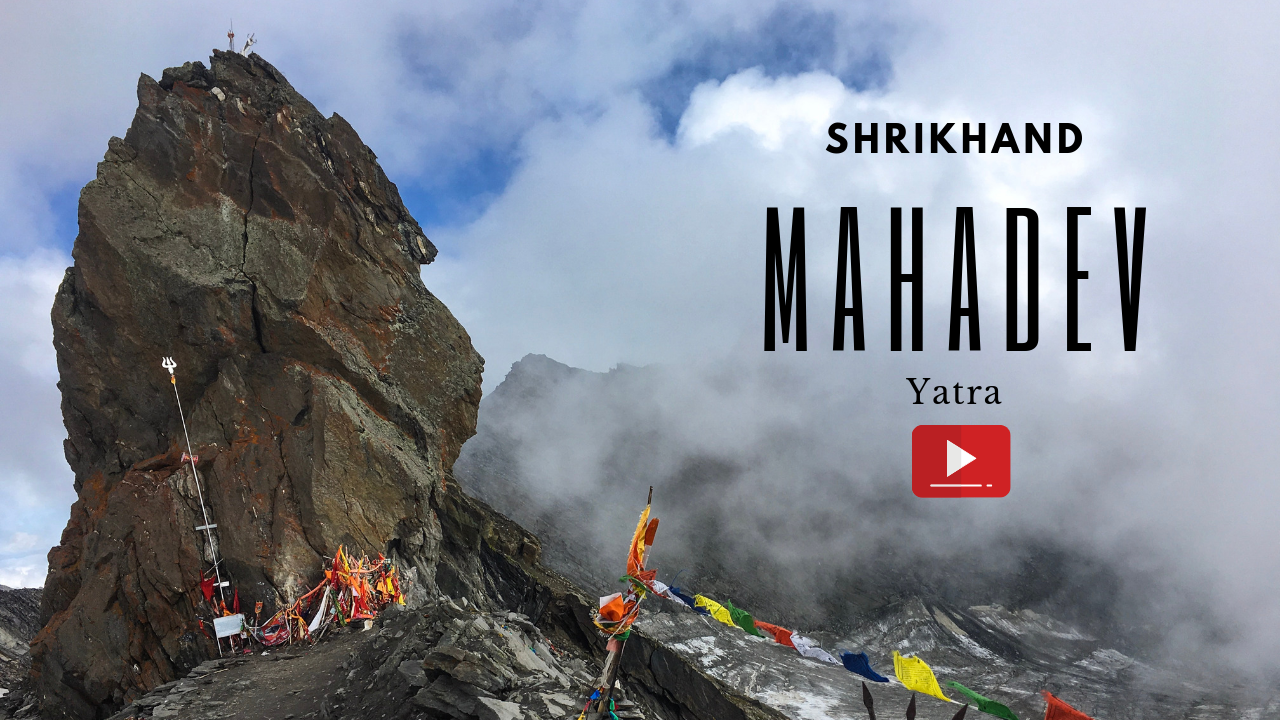 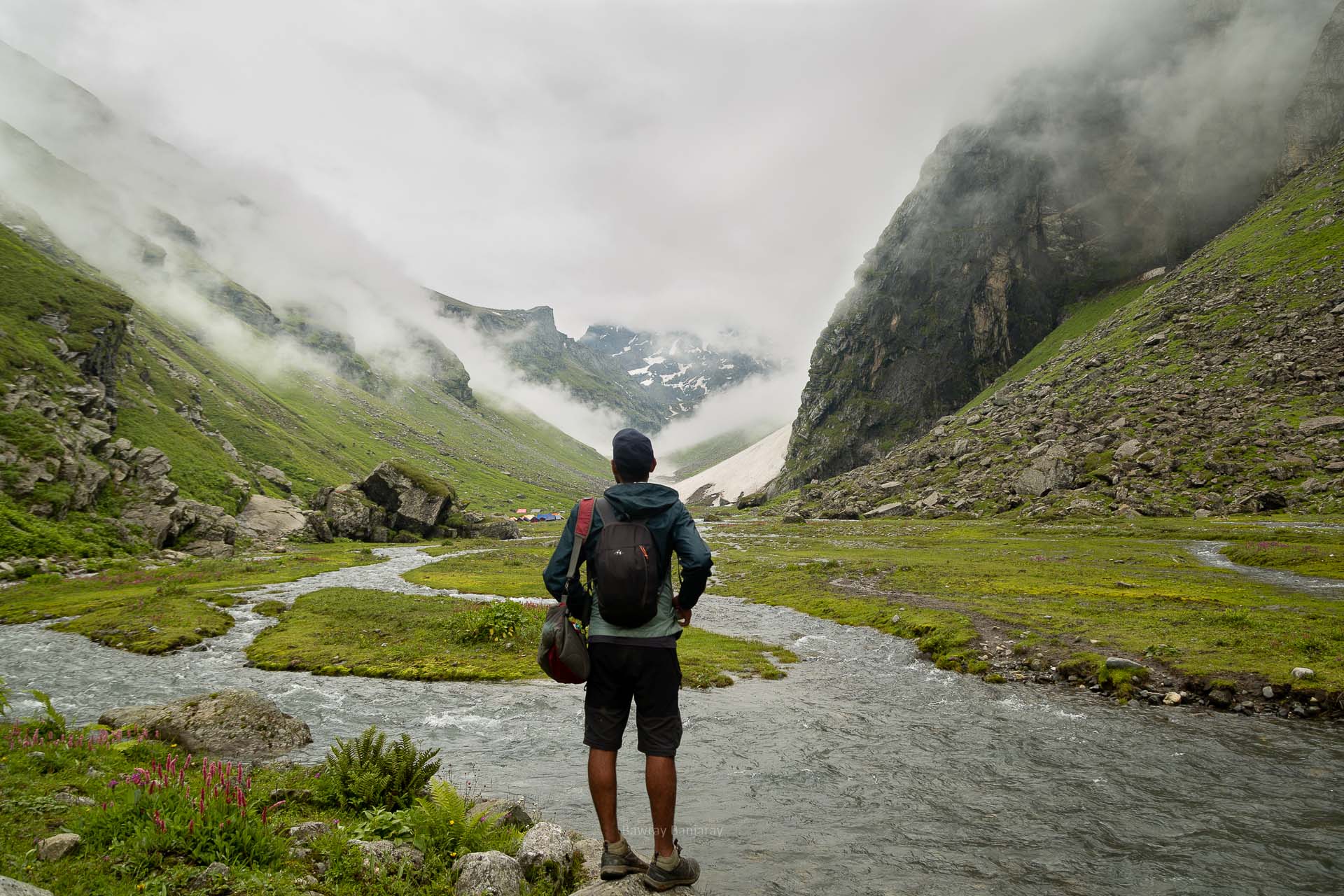 4 thoughts on “Things To Know About Shrikhand Mahadev Trek”